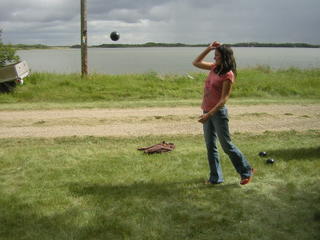 Here is my best girl playing bocce ball at the cabin, she has some nice curve-ball action.


Throwing balls toward a target is the oldest game known to mankind. As early as 5000 B.C. the Egyptians played a form of bocce with polished rocks. Graphic representations of figures tossing a ball or polished stone have been recorded as early as 5200 B.C. While bocce today looks quite different from its early predecessors, the unbroken thread of bocce’s lineage is the consistently common objective of trying to come as close to a fixed target as possible. From this early objective, the basic rules of bocce were born. From Egypt the game made its way to Greece around 800 B.C. The Romans learned the game from the Greeks, then introduced it throughout the empire. The Roman influence in bocce is preserved in the game’s name; bocce derives from the Vulgate Latin bottia, meaning boss.

The early Romans were among the first to play a game resembling what we know as bocce today. In early times they used coconuts brought back from Africa and later used hard olive wood to carve out bocce balls. Beginning with Emperor Augustus, bocce became the sport of statesman and rulers. From the early Greek physician Ipocrates to the great Italian Renaissance man Galileo, the early participants of bocce have noted that the game’s athleticism and spirit of competition rejuvenates the body.

As the game enjoyed rapid growth throughout Europe, being the sport of nobility and peasants alike, it began to threaten with the health of nations. The popularity of the game was said to interfere with the security of the state because it took too much time away from archery practice and other military exercises. Consequently, Kings Carlos IV and V prohibited the playing of bocce, and doctors from the University of Montpellier, France, tried to discredit the claim that playing bocce had great therapeutic effect in curing rheumatism.

In 1576, the Republic of Venice publicly condemned the sport, punishing those who played with fines and imprisonment. And perhaps most grave was the condemnation by the Catholic Church which deterred the laity and officially prohibited clergyman from playing the game by proclaiming bocce a means of gambling.

Contrary to the rest of Europe, the great game of balls thrived in Great Britain. Such nobility as Queen Elizabeth I and Sir Francis Drake were avid fans. According to legend, Sir Frances Drake refused to set out to defend England against the Spanish Armada until he finished a game. He proclaimed, "First we finish the game, then we’ll deal with the Armada!"

The sport first came to America in the English version called bowis from the French boule meaning ball. In accord with how the game was played in Britain, American players threw the ball not on stone dust (as is done today in bocce) but on close cropped grass which some say is the origin of the modern lawn. It has been noted that one early American playing field was Bowling Green at the southern tip of Manhattan and that George Washington built a court at Mount Vernon in the 1780s.

In modern times, the first bocce clubs were organized in Italy. Notably the first Italian League was formed in 1947 by fifteen teams in and around the town of Rivoli (Torino). 1947 also marks the beginning of the yearly Bocce World Championships.

Thanks to many Italian immigrants at the turn of the century, bocce has come to flourish in the United States. During its beginnings in the U.S. there were as many versions of the game as there were towns the immigrants had left. Bringing some order to the game is the Collegium Cosmicum ad Buxeas, the preeminent bocce organization headquartered in Rome, Italy.

It should be added that the oral traditions of bocce are just as much an important part of the game. Throw out a pallino and become part of the long heritage of the game from great thinkers such as Galileo and da Vinci, to rulers Augustus and Queen Elizabeth, to the noble Sir Francis Drake and even America’s own George Washington. Enjoy the world’s oldest sport, a sport known to revive the body and mind, and next to soccer, the most popular game in the world.

Wow, all about throwing balls in the grass.
Posted by Anonymous