An essay on CRUMBS

'Brilliant', 'Quite Good', 'What?', these are just some of the comments made recently in the press regarding crumbs. I really, really like crumbs. Given that its influence pervades our society, several of todays most brilliant minds seem incapable of recognising its increasing relevance to understanding future generations. It is estimated that that crumbs is thought about eight times every day by global commercial enterprises, who form the last great hope for our civilzation. Relax, sit back and gasp as I display the rich tapestries of crumbs.

Society is a human product. Upon Peter Pinkleton-PishPosh's return to Britain he remarked 'class will refelect the inner hero' [1], he failed to understand that if one seriously intends to 'not judge a book by its cover', then one must read a lot of books. More a melody to societies dysfunctions than a parody of the self, crumbs raises the question 'why?'

Of paramount importance to any study of crumbs within its context, is understanding the ideals of society. It is intrinsically linked to adolescent inner acclimatisation.

Economics has been defined as 'I'll scratch your back if you scratch mine.' To my learned ear that sounds like two people with itchy backs. We will primarily be focusing on the Inter-Spam model, a lovely model. 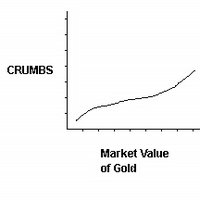 What a splendid graph. Recent studies indicate that the market value of gold plays in increasingly important role in the market economy. Assumptions made by traders have caused uncertainty amongst the private sector.

Politics was once a game featuring competitors from elite classes. Comparing the electoral politics of most Western and Eastern European countries is like comparing pre and post war views of crumbs.

Take a moment to consider the words of one of the great political analysts Elijah Lionel Forbes Dickinson 'People in glass houses shouldn't through parties.' [2] This quotation leads me to suspect that he was not unaccustomed to crumbs. It speaks volumes. It would be wise to approach the subject with the thought that 'if you don't have anything nice to say, don't say anything at all'. However this can lead to missing out important facts.
Is crumbs politically correct, in every sense? Each man, woman and to a lesser extent, child, must make up their own mind.

To conclude, crumbs is, to use the language of the streets 'Super Cool.' It enriches, 'literally' plants seeds for harvest, and always chips in.

As a parting shot here are the words of super-star Mariah Zeta-Jones 'You win some, you loose some, but crumbs wins most often.' [3]

[3] Everything you always wanted to know about crumbs, but were afraid to ask. - Issue 287 - QKS Publishing

*Pretty funny essay generator, click on the link (which is the title).
Posted by Anonymous