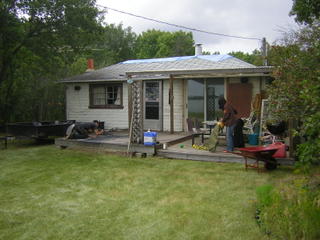 Now before you start envisioning the Lake of the Woods, and other picturesque locations, let me warn you. This is not that cabin, not by a long shot. This is farm feilds surrounding a dead Salt Lake. This is shack (a number of them). This is gravel road and rural. This is white trash.

This weekend was one such weekend, one of freedom and cabin fun.

So yeah, it was a fun weekend of freedom and relaxing and work and more relaxing.
Posted by Anonymous