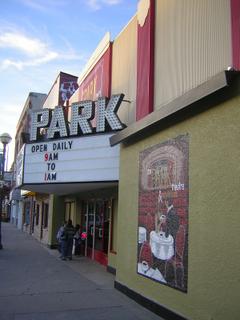 The Park theatre down in South Osborne, is now open for business.
Ron Moore's new improv night, called "Jack'em & Attack'em", has opened and the people love it. It was an honour to be invovled in the historic beginnings. Lee and I took the stage with Ron and Jacked'em and Attacked'em. There were folks from the neighbourhood who showed up, and laughs were had.