Bremen was crazy! The night we were performing there it was also the opening of the oldest (in Europe? In the world?) fair grounds. There was also a football match between Bremen and Dortmund. So there were more people wondering in crowds than we have ever witnessed. So of course, after the show, we convinced everyone to come to the fair with us. At the fair we ate well (we ate potato pancakes, corn on the cob, pizza, mushrooms and crepes) and we played carny games. It turns out that we CRUMBS are all marksmen as we all won prizes shooting air rifles at little targets. But it was really Lee whose light shone the brightest, a small crowd gathered as he shot 19 targets with his 20 shots winning two Naked Lady Lighters. Not satisfied with just winning at shooting, he also had to win a creepy Micheal Jackson doll using The Claw! 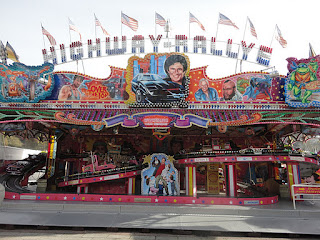 Bremen, finally we have seen your fair. We like you. Thank you.

The story of a shamed astronaut who is now divorced and in a custody battle with his former wife. His son still loves him and believes in him, but has pressure from his mother's new boyfriend who just happens to be a well decorated member of NASA. It turns out the poor shamed astronaut had accidentally killed all the members of his crew by being distracted by aliens when he was supposed to be monitoring the oxygen levels in the spacecraft. NASA has officially denied the existence of aliens and thus have discharged him dishonourably. So, to win back the respect of his son, he has lied about going back to space on a secret mission. His son sneaks away from his mother and her new beau and convinces his father to sneak onto a rocket and they both go into space to pursue the proof of alien life needed to clear his name and return him to glory.

The story of a man who is slowly losing his supposed manhood after losing his job. He gets the help of his best friend to find his manliness again by getting a job on the killing floor of a meat packing plant. He embarrasses his best friend by being grossed out by the thought of cutting up the pigs and passing out at the sight of blood. His lack of cliched manly things continues as he gives up drinking beer for chardonnay and starts finding joy in baking and doing other stereotypical “female” things. This escalates and eventual his best friend is fired as well, which affects him in the same manner. As they no longer find pleasure in watching sports and drinking beer, they both find happiness together in less traditional male roles, realize they are in love and spend their lives together. Awwwwwwwwww.

More updates to follow. Always behind on these updates, it always feels like I am jumping back and forth through time.
Posted by Anonymous