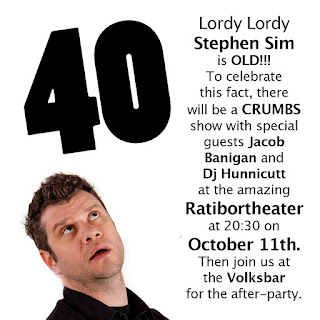 CRUMBS again returns to Berlin. How many times have CRUMBS actually been to Berlin? Sooooo maaaaaany tiiiiiiiiimes. We love Berlin, the freedom city! 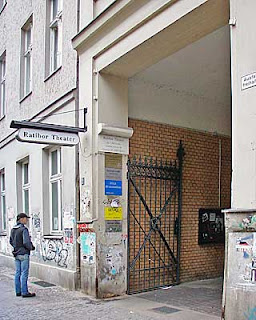 Now, there comes a time in everyone's life, assuming that they continue to live their life, that they get older. I have always believed that your age is just a number, but sometimes that number... well, sometimes that number has so much weight attached to it and so much social baggage that you can't help but contemplate your mortality and the absurdity of getting old. I turned FORTY in Berlin, I turned old. I don't feel older, and I certainly don't feel what I always imagined FORTY to be. Thankfully, I live a much younger life, look much younger and act much younger. I was even told by shocked strangers that I looked THIRTY and not FORTY. I would like to say now that my THIRTIES were great, much better than my TWENTIES. If this trend continues, and I intend on continuing the trend, my FORTIES are going to be hyper-amazing. Alright new chapter in my life, start. 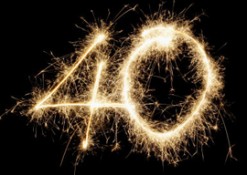 Now the shows:
Show number one was the birthday show and celebration. I had invited Jacob Banigan (yes, the same one I mentioned before who now lives in Graz) to join CRUMBS for the set. The plan was to do the first half of the show with him and then give myself over to the will of Berlin and let then pull some surprises in the second half. We would all then go to the Volksbar and Dj Hunnicutt would then make the crowds dance and we would all just party. 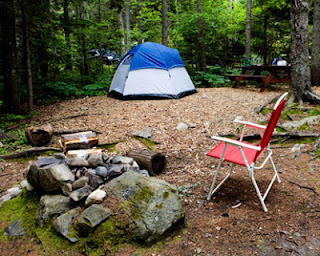 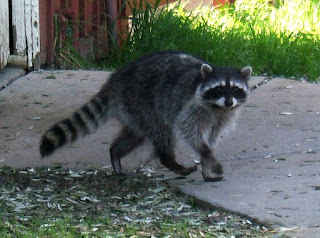 The suggestions in the first half were “physics” and “camping”. We launched into stories about a guy who had never camped and his friend from work who felt sorry for him and decided to bring him camping for the first time. This of course led to a run in with a hypnotic raccoon and eventually a new friend. The show also involved a physics experiment that was taken away from the lead scientist and given to another scientist with a cooler name, so that the discovery would be named something better. This is a very important thing in science. If your theory (or new particle, in this case) doesn't have a cool name, nobody outside of the science community cares. 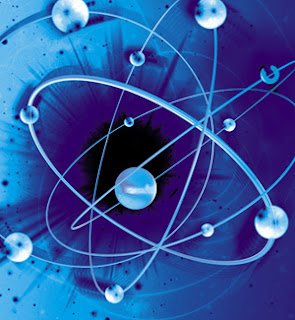 The second half involved a number of scenes with random special surprise guests. The guests started with members of Die Gorillas (the resident Berlin improv company which is the reason we ever ended up in Europe in the first place) and then the first real surprise came. Nadine Antler, the improviser from Wurzburg stepped out on stage... I was surprised! Good, no more surprises were possible right? Wrong. I was then in a scene and out onto the stage stepped Robert Slade! What? Robert Slade had flown in from London to surprise me on my birthday. I flinched for a millisecond and then stayed in the scene (the years have taught me to remain professional). Wow? 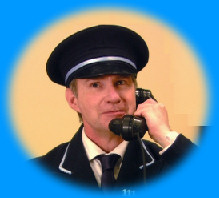 The evening continued and many drinks were consumed, many birthday cake candles were blown out, and many dance moves were danced. Success.

The second show was the next day, and I was also wise enough with my years of experience to not have a hang-over (again, professional). The show was inspired by someone yelling out “prostitute”. Classy audience right? Well, after mocking the individual in a classy way, the audience responded with “philosopher”. So there we were, with an audience that straddled the whole spectrum between someone who has sex for a living and someone who thinks for a living. We also received “potato peeler” but this didn't get as much reaction as the first interaction with the audience. The show then started. 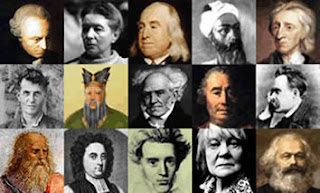 We followed the story of a philosophy professor who was disappointed in the latest batch of students, not finding a suitable protege to replace him in retirement. When in walks the daughter of the city's patriarch. We also learn that her father intends on buying the ailing university and turning it into a sports-plex. The new young student has been in love with the professor for years, since reading his books, but the professor is already married and turns her away. How can things get worse? His wife is tired of his words and thoughts and just wants a human's touch. She turns to “Rico” a male prostitute (we worked it in!). The young student, feels embarrassed and jilted and joins her father in selling the university. But then the young student and the old professor end up together and they save the university. Hooray for happy improv endings. 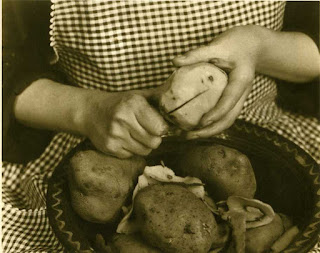 We also followed the story of a man who peels potatoes for a living. He feels unsatisfied at his job... for some odd reason. He feels empty inside. We also see his home life and realize that it is also an unhappy environment. His life sucks and lacks meaning. He quits his job and searches for meaning. This of course leads him to the philosophy department at he university. What a coincidence. The philosophy professor then tells the man that his empty life is about searching for the meaning, not finding the meaning. Happiness is created within this knowledge and the professor hands his position to his young student and ends up peeling potatoes with the him at the end. Neat huh?

Still more posts to be posted about the CRUMBS 2012 Fall tour. Keep yourself posted here for all the details.