CRUMBS at the Berlin IMPRO Festival 2013

What can I say about Berlin that I haven't said already? Probably tons and tons. But let me just say, that what I'm writing here now is about the Berlin IMPRO Festival 2013 and not really the city. I was so busy with the festival to even think about going into the city to explore. I will wait until we return to Berlin later on in our tour to ride the U-bahn and explore, which just happens to be one of my favourite things.

CRUMBS were lucky enough to be at the very first Berlin IMPRO Festival way back in 2001. We also were lucky enough to be a part of almost every single festival since. I think we've missed two in the history of the festival. This festival was not only the epicentre of the CRUMBS improv earthquake across Europe, it is also the meeting point for a good number of European and North American improvisers and has fostered quite a good number of co-productions and collaborations that have heightened and forwarded the art form of improvisation internationally. I suppose what I'm trying to say is "I love this festival!".

This year at the Festival there were several projects that were undertaken as well as the showcase shows. CRUMBS did our own CRUMBS Classic showcase as well as the European premier of Lee White's Improv Game Show format (which was named "Professor Spontaneous presents: The IQ Improv Challenge… or something as equally confusing and silly) and our improv show with the audience (called "Your 15 Minutes of Fame"). All three shows went quite well, though there were some particularly nice words uttered about the improv show we do with the audience. First let me explain where this show comes from. It comes from Stephen McIntyre, who along with Robert Slade (who just happened to travel to Berlin and visit us at the Festival this year!!!), were the first improv that CRUMBS ever experienced. The basic idea is, that to prove that anyone can improvise and that you don't really need "rules", McIntyre would do improv scenes with audience members who had never done it before. These were some of the earliest improv shows we had ever done. Now, being the inexperienced improvisers that we were at the time, it is fascinating to look back on these shows and realize that it was an amazing learning environment. Here we were, new to improv, hopped up on fear and adrenalin, performing with someone who was infinitely more afraid than we were. We had to learn to be more calm than our partner, to take care of our partner and patiently let the flow happen. It was only when we looked back that we could see that this "crazy improv show" was what formed the foundation to our relaxed style.

The 15 Minutes of Fame show does show up in several different forms. We do improv scenes with audience members as an interactive improv show for private corporate gigs. We've also done the show with audience members where we just ask anyone to get up and do a scene. But the origin of the idea and the seed of the beauty is doing improvised scenes with audience members who have never done improv before… wait, haven't even taken a class… hold on, haven't even set foot on a stage. To do this we create a safe place on the stage, we never force anyone, and we patiently wait for someone to join us onstage. Sometimes this takes… a long time. We calmly wait. Then we calmly do the scene. The audience calmly goes wild when it's over!

Another great thing that I should gush about is the opportunity in this festival to take on projects. This year, the big project was to do a show in one location but in three different time eras. We did our show in an old Markthalle (market hall) in Kreuzberg (a neighbourhood of Berlin). We did the show in three distinct and important eras in the history of Berlin and the area. 1981 (during a squatters meeting), 1948 (int he time after WW2 and just before the Air Bridge) and 1926 (which were some wold times). The show involved a cast of more than 40, full costumes, and a multi-focused multi-staged play area. We had tap dancing, live singing, a real boxing match, swing dancers, American soldiers questioning audience members, and hundreds of audience members transported through time. The show, at times, felt more like a LARPing time machine happening than anything theatre-like. It was a great time. And for me personally, it was just fun dressing up like an American soldier in 1948 and acting like I owned the place (I also rocked a moustache). Thank you to the festival and all those involved in this monster experiment.

An American soldier circa 1948. 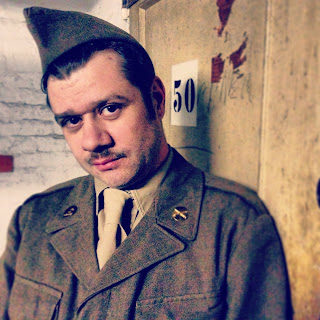 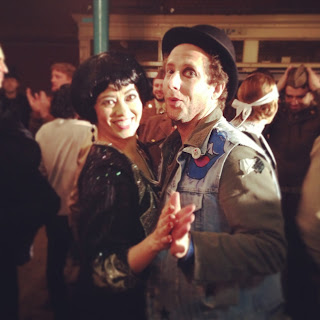 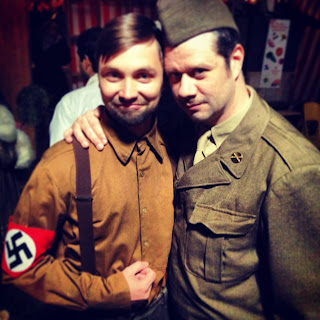 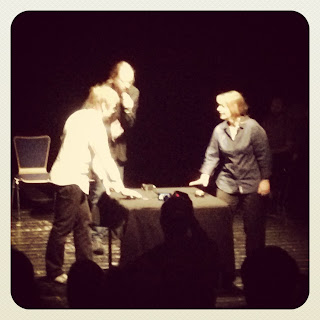 Lee (The Hippy) and Randy Dixon (the General) 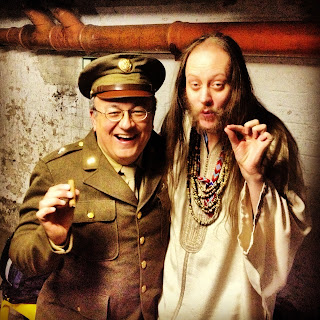 The volunteer cast of our "15 Minutes of Fame" show. 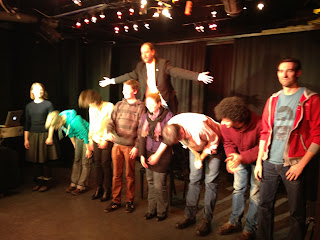 Me and some of the improvisers from Mumbai. 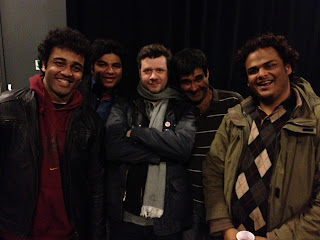 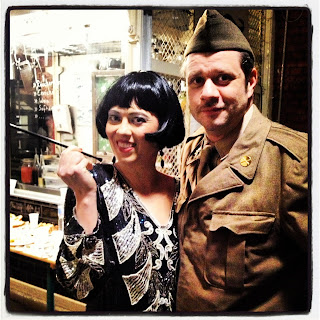 At the end of the festival. It was time to sleep… for, like a second. We had to now get to Graz, Austria to hook up with our friends Jacob and Trixi (and their daughter Lili Rose) to work on a CRUMBS co-production with Theater Im Bahnhof… but hey, that's a whole other post. Next time.