Comedy and improv and then even more comedy keeps just happening in Winnipeg. It's mostly because Winnipeg breeds funny. Geographically speaking, the centre of continents are usually funnier than their coastlines, it's just a fact, a fact with many exceptions. One of those exceptions is the East Coast of Canada. Another exception is the West Coast of Canada, but the west coast isn't trying to be funny, they just ARE funny. Not as funny as an Albertan Conservative trying to digest the latest provincial election results... but I digress.


Here is the scoop on the comedy happening in Winnipeg!


An improv show filled with comedy and suspense and story and hilarity is just what you need to recover from a May Long Weekend of rain soaked sleeping bags and soggy fires. We have a strong leak-free roof at the King’s Head. We have a stage filled with live comedy and improv. We have beers that are kept cold in a fridge and not in a 20 year old cooler. We have food that is prepared without the use of fire. It isn’t quaint and it isn’t rustic… but it is the Comedy Knights Show for FREE at the King’s Head on a Tuesday.

Stephen Sim from CRUMBS hosts many amazing guests in this show.
Special guests include some of the amazing comedy folks in town filming Sunnyside (City TV). See Pat Thorton, Alice Moran, Rob Norman, Alistair Forbes, and Kevin Vidal.
As well, we have the ladies from Outside Joke (are they a brand new sub-division of the much loved Winnipeg improv troupe?). We have Caitlin Curtis (the Improv Bachelorette). We probably have even more...

There are so many guests and so much comedy and so little rain soaked drippy tents… it’s going to be great.

(*Please be sure to store you food at least 30 meters away from the stage. Because bears)

H.U.N.K.S are doing another sketch comedy show at the Park Theatre. This time their special guests are Outside Joke. So this show will be filled with the glorious sketch comedy and the glorious improv. I don't use the word glorious enough.

May 20th at the Park theatre! 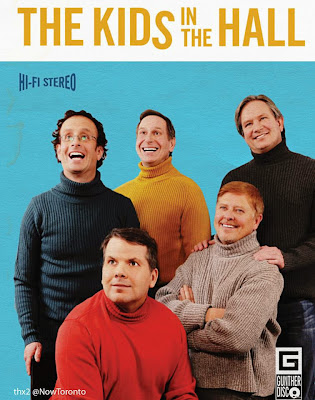 The Kids in the Hall are on a reunion tour and they play a show in Winnipeg on Friday at the Walker Theatre/Burton Cummings Theatre... you know the theatre.

Kevin McDonald has been living in Winnipeg so obviously Winnipeg has claimed him as their own. So this is really like a legendary comedy troupe returning to play their hometown crowd, sort of.

Come and see the TV sketch comedy stars of the 90's and laugh really really hard.

Fri, May 22nd at the old Walker Theatre!

LINK TO FIND OUT MORE INFO ABOUT KITH

Todd Barry brings his live comedy show to the Park Theatre on Thu, May 21st. He's funny. You want to see it if you like comedy.

Well remember that the FRINGE is coming up and there will so many shows with many comedy hilarities inside them.

1)
CRUMBS returns to the King's Head

2)
Stephen is helping out with a couple other shows in the FRINGE. What Could Go Wrong? and Revenge of the Meek.

3)
DnD Improv and Hot Thespian Action will be returning to the GSAC to do shows.

4)
Even more... there are even more shows to see. Don't worry though, I'll keep you updated.

Enjoy the outdoors
Posted by Stephen